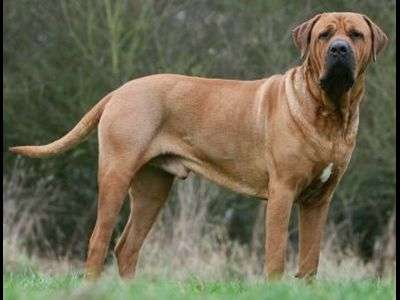 It was first seen in Japan in the mid 19th-century. There the Tosa was treated as a fighting dog. But the rules said, that he cannot bite or bark, when he fights. Otherwise it got punished. The Tosa had to win, while it pushed the rival down on the ground.
The breed emerged, because the breeder mixed many breeds together, as for example the Shikoku-Ken with western breeds, like the Great Dane, Bulldog, Bull Terrier, Mastiff, Saint Bernard.
Until the breed Tosa was originated, it took a lot of time. The most important details it had to have, were the size and the muscles.
In the past the Tosa was a fighting dog. Today it is a watch dog.

The Tosa is a patient, calm, brave and valiant dog, which can also be conservative and sometimes even a little bit willful and arrogant. But for the most part the Tosa is a very proud dog, who knows, that it is invincible. It has a high self-esteem and is a very faithful dog to his owner. It really needs a family, who cares about this dog. If the Tosa is treated well with a lot of love, it is the perfect shepherd, altohough this breed does not bark a lot.
The Tosa obeys his owner, and just its owner.
If the master of this dog rear it good, you will hae a very faithful and devoted dog.
Sportsmen will have a lot of fun with this breed, because the Tosa loves to run.

The breed standard says, that a male dog has to be at least 60 cm tall and a female dog at least 55 cm. But it is important, that the weight is relatively good to it. Its weight can add up to 70 kilogram.
The Tosa´s body is very muscular, powerful, but also graceful. Its fur is short, hard and thick in many colours, like for example red, black, apricot, fallow or brindle. Sometimes the are white stains on the chest or paws.
The Tosa has dropping ears, square muzzle and a thick tail, which hangs.
Its life expectancy is about ten years old.

As is well known, the Tosa has to be healthy. That means especially, that their teeth have to be good and their weight has to be okay.
Moreover it has to have a good posture and trimmed fur.
Also the dog has to walk well on a lead.
His eyes have to be clear. Preferably its fur has to have just one colour, without the specific white spots on the chest or paws.