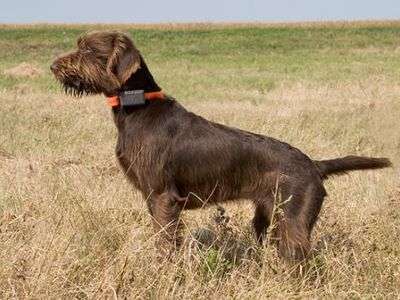 Breed development credits for Poodles is generally given to the French, although there is a debate about the possibility of the origins coming from Germany. The spelling in German is Pudel, and this is used in Pudelpointer.

The first cross between an English pointer and a Pudel to create a new breed took place in 1881 in Germany. Kaiser Frederick III owned the English sire, and the dam was a German hunting poodle. The idea behind the breeding was to create a combination of the natural outstanding work abilities of two highly specialist dogs in one breed. This was a combination of:
Intelligence
An instinct to retrieve
Trainability
Willingness to please its owner
Hunting ability
Good protective coat
A desire to hunt game
Pointing Instinct
Endurance
Field nose
In Germany the Pudelpointer has always been highly ranked among the best performers, in tests in the field. It is a breed of dog that is sought after by people who look at owning an animal that combines "drive and desire".

The Pudelpointer of today has a short waterproof rough jacket, with camouflage colouring. Even today in Germany, it is difficult for a dog to reach "stud book" status without passing a series of very demanding tests.

This is a medium size dog that reaches a height of between 22-25 inches at the shoulder and can weigh between 45-70 pounds. The colour of the breed is a liver variant, with permitted white markings on paws and chest. The classic look of a Pudelpointer is a coat that is wiry, dense and harsh to touch. There are many combinations that are possible, and some coats are smooth while others have long woolly coats. This breed of dog has pronounced whiskered muzzles and eyebrows. The tail is docked back to around 75 per cent of its original length.
By nature, a Pudelpointer is inquisitive, friendly, and eager to please. It is a terrific hunting dog, and it is a pleasure to have around the house. The experts behind the breeding program that have developed the Pudelpointer wanted the modern animal to be "proud in the field", and make good "fireside companions".
Pudelpointers are superb water dogs though they do not come up to the standard of a retriever for marking ability.
As with other typical German working breeds the Pudelpointer loves discipline and work and has a high level of learning ability.