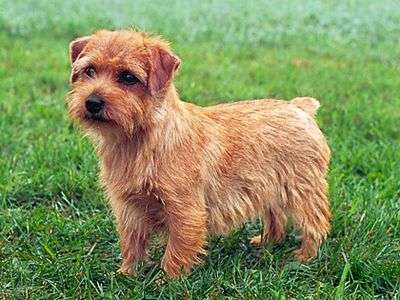 As a typical terrier, Norfolks are tough and tenacious. They will chase and kill rats, squirrels, ducklings, chicks, rabbits, mice, and even foxes if given a chance. As a show breed, they are permitted to have "honour scars" in the ring as a testament to their scrappy nature and field worthiness. Unlike Norwich Terriers - a very similar breed- Norfolk Terriers have ears which fold over, which is a handy way of distinguishing between the two. Furthermore, Norfolk Terriers are strong: they don't tend to want or need pampering, although they can make good childhood companions if they are raised with kids. Norfolks aren't known for being yappy, but will bark if they are under-exercised or otherwise under-stimulated.
In common with other terriers, Norfolks have the ratting instinct bred into them: they were originally used as working dogs to keep down vermin levels on farms, and also bred to be general farm dogs and hunters. Because of their innate tendency to chase small animals, they should be kept on their lead in public areas and parks. Equally, they have stubborn natures and puppies can be difficult to house train. Therefore, crate training is recommended. Norfolks love to dig, too, so garden fences should extend to at least 30cm below the soil to keep your dog contained. As with all pets, Norfolks will become overweight if they are given too much food and too little exercise, and they are a particularly energetic breed. Norfolks are small dogs, but their working dog heritage means that they require reasonable amounts of exercise to remain healthy and happy. It's recommended by experts that Norfolks have around 30 minutes' vigorous play or walking per day.

As with all pedigree dogs, there are health issues to consider with Norfolk Terriers. Mitral Valve Disease or MVD is a life-threatening heart defect which breeders are working to eradicate from the dogs' genetic line entirely; all Norfolks used to breed should be tested for the condition, and those who have it should not be allowed to have puppies.
Another potential health issue is Canine hip dysplasia. This painful condition can cause both lameness and arthritis as the dog gets older. Not all dogs with the condition will exhibit symptoms, so all Norfolks should be screened, and those with the condition not allowed to breed.
Patellar luxation. This condition can be very debilitating in some dogs, but others live with it with relative ease and minimal discomfort. Essentially, this condition means that the dog's knee joint, usually in the hind leg, slides out of place, which can cause paralysis in the leg as well as terrible pain. The final health complain which owners and breeders report for the Norfolk Terrier is vaccination sensitivity. Occasionally, Norfolks exhibit allergy-like symptoms to routine injections- the symptoms can include swelling of the face, hives, and fatigue. In rare cases, this vaccine sensitivity can lead to death, so dogs who are suspected of having it should be monitored closely following their immunisations.

Norfolks come in red, black, wheaten, grey and grizzle shades, with a soft, featherlike undercoat and a typically terrier-like wiry topcoat. Norfolks require weekly brushing, although their scruffy look is part of their big appeal.