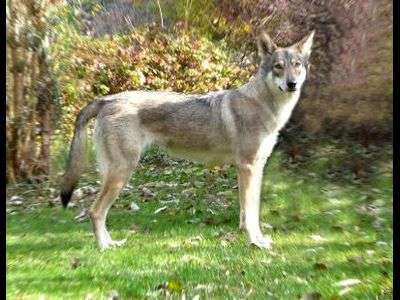 Assertiveness in conjunction with patience, time and understanding is an essential prerequisite. If you are not able to do this, you should be honest with yourself and don´t buy a Saarloos in your own interest and in the interest of the dog. The Saarloos is still in a very close relationship to the wolf and for this reason it will not like a tight binding to a human, such as a German shepherd or a poodle for example would do.
The Saarloos is reserved, cautious but confident.
To bring all it´s many good qualities to flourish, it is important to let it learn from good experiences with humans and human life from puppies legs on in all areas of life of course and also in concerning other dogs.
Cautiously it should be accustomed with all kind of situations in which it will be involved with many people, restlessness or loud, sudden noises. Unknown people should not be intrusive, but give it the chance of a slow, gentle introducing in which it is able to make the first step by itself.
Like wolves, from which it is derived directly, it responses extremely sensitive and sometimes anxious to the overstimulation of human society.
Once managed to take off it´s fear (as early as possible) it will become a nice and friendly dog, but stays reserved towards unknown people a life long.
This dog reaches puberty later than other breeds and is grown up around the age of three years. Bitches get in heat only once a year, just like wolves.
The Saarloos needs a lot of engagement. Not only to be in physically health, but also spiritually.
It is above average intelligence and eager to learn and needs a meaningful job that satisfies it. It learns willingly and quickly when you understand how to motivate it, but it will consistently refuse to perform unreasonable commands or perform mindless repetition exercises. Not offered the opportunity to spiritual fulfillment, it will inevitably seek it´s employment itself (almost to the rare joy to its employer).
Left to itself, it can create a barely imaginable destructive potential.
Wolf dogs are very well able to learn by mere observation. In short time they know how to open doors, windows, cabinets, etc.
The problem solving behavior of it´s wolfish ancestors enables this dog to fantasies of escape that exceed those of the human far. Two meter high fences or walls are no real obstacles. Wire mesh or wooden fences can not stand the power of her teeth for long. What can not be skipped or climbed over (and in this they are very clever), will be undermined if the barrier is not at least half a meter deep into the ground.
If you have such a reserve, you have to prepare yourself to be persistent, loud howling when the dog is let alone, which causes the fewest neighbours to applause.
The fact that this dog almost never barks (although it is able to do so), does not mean that it can not be very loud and really nerv-racking!
The Saarloos is hardly able to stay alone. Although you can get it used to be, it will always suffer from the absence of his caregivers.
Not able to fulfill all these aspects, one should be honest with oneself and don´t get a Saarloos. A big help in keeping and educating may be a second, possibly older and experienced dog for it´s company.