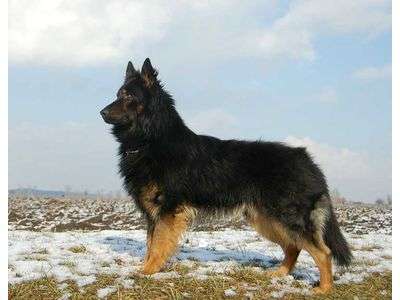 It is not clear where the original ancestors of these dogs came from. Experts suggest that they were brought into the region from either Poland or Silesia. Another argument is that they were brought out of the Bohemian Forests by farmers. The relationship of the breed is also a mystery. There has been suggestions that the Bohemian Shepherd was a direct descendant from other similar herding dogs such as the Pinscher/Schnauzer or the Spitzen. Whether the breed was created by a combination of the three, or even a dog-wolf hybrid mix is unclear. Unless more evidence is found, this is a mystery that looks set to remain unresolved.
An opinion which is more than likely close to the truth, is that the breed originated as a cross between the Spitzen and Pinchers. This would have given the animal its coat and distinctive "look". During the time period that these dogs were utilised for herding, they were more than likely crossed with other herding breeds, which developed the straight tail and long slim body.
The Chodský pes could possibly be one of the predecessors to the German Shepherd. The existence of the strain has been recorded, as long ago as the 14th century, and could go back further. It has been bred professionally since the 16th century. Modern breeding techniques commenced in 1984, and now there are a lot of breeders that specialise in this animal in the Republic. Between 1994 and 2009, around 3500 pub were registered.
Bohemian Shepherds have been used to guard the south west borders of Bohemia, and private homes in the Chod region. Local people obtained permission to own large dogs for this purpose. This breed is so famous in the Czech Republic, that they were assigned a flag symbol, which is still used today, on the badges of Czech Scouts.

The dogs are medium height and length. The adults stand between 19-20 inches, and weigh between 35-55 pounds. Used to being exposed to the harsh East European weather, the Chodenhund has a coat that is long and thick, with a rich undercoat for insulation against freezing conditions. The animal's body is compact, and well proportioned. It has small, pointed, and erect ears set high on the head, with a long graceful neckline. One of the distinctive characteristics of this breed is an unhurried, light and fluid walk.

For active owners, this is the perfect dog. The Bohemian Shepherd is not an aggressive animal, but does have a lot of energy to burn. It is highly intelligent which make it easy to train. It is well behaved around children, and other animals, so makes the perfect family pet.
Because the Chodenhund has a very good sense of smell it makes the perfect rescue dog, and is a terrific companion for owners with a disability. It is also an outstanding watchdog. This breed is noted for having a friendly calm temperament.