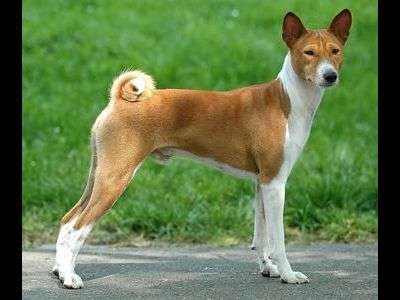 Basenjis are attractive dogs which have short hair. The hair is glossy and fine and comes in a wide variety of possible colours, such as pure black, copper and mixtures of black, white and tan. The American Kennel Club requires the breed to have patches of white on the chest, the tip of the tail and on the feet as a standard. They shed very little hair and actually groom themselves in a manner similar to cats, which means they are particularly easy to care for as they need little grooming.
The Basenji is quite a small dog, but is athletic in build with a level back and straight legs. They are of average height; males range from 41 to 43 cm, with bitches a bit smaller. Its head has a few wrinkles around the forehead area and it has bright almond-shaped eyes of dark brown. The muzzle is quite small and pointed. The tail is set high on the rump and curls to one side in a rather endearing manner. Another interesting Basenji feature is the fact that they do not bark; although they can make a low yodelling sound as well as growling and roaring.

Basenjis are highly intelligent, which can make them ideal pets for some owners, but unsuitable for those who haven't the time these wonderful dogs deserve. They are very good at climbing, escaping and getting into mischief. Basenjis are quiet and reserved compared to other dog breeds, but they generally respond well to various forms of training and can form strong bonds with their owners, although they are frequently wary with unfamiliar adults and children.
However, although the Basenji is a vocally quiet dog, it needs plenty of exercise as it is physically very active. They need at least one long walk a day and ideally a garden to play in. They cannot be trusted around cats or other small pets but will live happily with two or three other dogs of the same breed without any fighting. As Basenjis can become easily spoilt and demanding if they feel they are at the top of the pecking order, they are most suitable for experienced dog owners who have a strong understanding of canine behaviours and have a calm and confident approach.

Basenjis are prone to kidney problems, such as Fanconi's Syndrome. They can quickly become overweight if not given sufficient exercise; for a male the healthy weight range is between ten and twelve kilograms, for a female it is nine to eleven kilograms. Eye problems and intestinal problems are also common with increasing age. The average life expectancy for this breed is ten to twelve years.