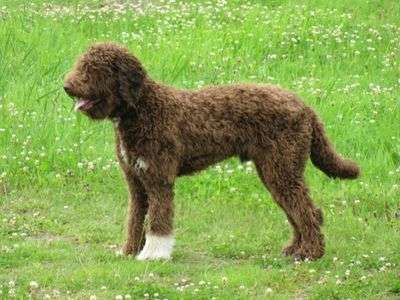 French Water Dogs are usually solid brown or black, although some of the dogs can have patches of white in their thick, curly fur. Accepted colours also include fawn, pale fawn, red fawn, pale grey, white, and pied. Mixed colours, except with white, are considered to be a fault. The dogs' other name, Barbet, derives from the French word barbe, meaning "beard", and this facial hair is a feature of the breed. As with other non-moulting dogs, French Water Dogs are a popular choice for allergy sufferers, although time should be spent in the presence of the breed for a while first to test an individual's degree of reaction. The breed's thick, waterproof fur and water dog heritage means that lots of dirt and mud -even pond weed- can be dragged back home and into the house following a walk. Luckily, the dogs take fairly well to being hosed down. Long coats will require more maintenance and grooming to prevent tangling and matting.

French Water Dogs are intelligent and loyal, although this does also mean that they require both training and discipline. In general, the dogs are not aggressive, and make good companions for the elderly as well as children and toddlers. Originally bred to retrieve hunted game from water, the breed, in common with many others, was originally a working dog. Because of this heritage, and their larger size, French Water Dogs require a moderate level of exercise to keep stimulated and healthy. The dogs love to chase frisbees and balls, making them great play companions, but this does also mean that they should be kept on their leads in public places such as parks and beaches.
These dogs are vigorous and lively, and as their name suggests, they love splashing around in water. They are an ideal companion for active people, particularly if they live near lakes, streams, ponds, or rivers.

Due to small numbers of the breed worldwide, it is hard to isolate conditions which may be due to genetic faults within the dogs, although some health issues are known. Although in general French Water Dogs tend to be a sturdy, healthy breed, in common with other pedigree lines, inbreeding has caused some problems. One of these is canine epilepsy, although researchers in Helsinki are working to isolate the gene responsible. If one of the breed is shown to have the condition, they should not be allowed to breed. Due to their preference for the water, Barbets, in common with other water dogs, commonly suffer from ear infections, which always require proper care from a vet.
Some older dogs are also known to develop hip dysplasia.