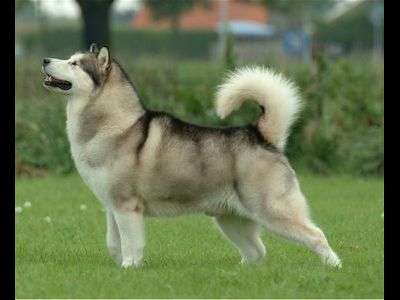 History of the Breed

For more than 2000 years, the dogs were carrying goods and sleds in the arctic area. Until the 19th century, the Alaskan Malamute was the only existing breed in the north-western arctic. Its name originates from a clan of the inuits – the Malemutes, who were the first in domesticating these beautiful and strong dogs. When the US-Americans occupied Alaska and drove off the inuits from their land in the late 19th century, the Alaskan Malamute became a popular dog for American sled dog races. But soon, the Siberian Husky was found out to be faster and replaced the Malamute in this area. The breed risked to be forgotten, until the US-American Dave Irving attended to them and brought a Malamute couple with him to the south, when he left Alaska in 1900. Professional breeding began in the late 1920s and in 1935, the Alaskan Malamute became a registered breed by the American Kennel Club (AKC).

Alaskan Malamutes are known for being highly intelligent, friendly and trusting dogs with distinctive pack behaviour. They are very child-friendly, but should not be walked by smaller children, because of their power and hunting instinct.
Alaskan malamutes need to be outside a lot. Due to their urge to run, they are perfect companions for bike tours. Two or three hours per day should be the minimum of outdoor exercise for this arduous breed. Alaskan Malamutes have a distinctive hunting instinct. Therefore it is recommended to always walk them with a leash. Since they don’t have any watchdog instinct, Malamutes are calm dogs that bark very rarely.
The Alaskan Malamute requires a strong but caring leadership. It is a powerful and pride breed, that has it’s own will. Therefore the owner should prove himself to be the leader of the pack from time to time. If the Malamutes role in the family once is understood, it guarantees to be a trusting dog with a strong bond to its owner. The breed prefers company (to humans as well as to other dogs) and should not be let alone for a long time.

The Alaskan Malamute was bred for endurance while hauling heavy freight on sleds. In comparison to the Siberian Husky, whose breeding was aimed to originate fastly running dogs for long distance trips, the Alaskan Malamutes body is stronger and bigger than the bodies of the favouring Huskies. Alaskan Malamutes have a weather resistant double coat with soft and greasy underfur, which is longer than the thick guard hair. The coats colour varies from black with white marks on breast, paws and face, over wolf-grey to different shades of brown-tones. Solid white coat occurs rarely. Furthermore the breed can also originate completely red exemplars. On the contrary to the Siberian Husky, the Alaskan Malamute doesn’t have blue but brown, brown-red or black eyes. Blue or mixed eyes will be regarded as breeding faults. The Malamutes head is wide with a massive snout. Its upright ears are small in comparison to the head and show a triangle form. In attention, the ears stand firmly erected. The desired size describes 58 cm and 34 kg for female and 64 cm and 39 kg for male dogs. The difference in size between males and females is often quite remarkable.